Water, an element along with Earth, Air and Fire that we take for granted. We all learn in school that 97% of the water on the earth’s surface is in the oceans and being saline, is not potable. About two per cent is in polar ice caps and glaciers. The remaining balance one per cent, that it is found in rivers, lakes and ground water sources which we use for all our human needs.A perennial river can be called as that has continuous water flow in parts of its stream bed all year round. There are about 10 perennial rivers in India and most of them are in the northern part. Ganga, Yamuna, Indus, Brahmaputra, Narmada, Mahanadi, Tapti, Garghara (Saraswati), Sutlej and Thamirabarani (Sole perennial river in the south).But in just one generation, our huge perennial rivers are turning seasonal. Almost every major river has become a point of political conflict between states about who has the right over it’s water rights. (Mother Earth must be laughing at this)

Rivers are the origin of our Indian civilisation. Initially Bharat was also reffered to as the land of seven rivers. The mighty civilisations of Mohenjo-Daro and Harappa came up along the river banks of Indus, Sutlej and ancient Saraswati. The southern part of our country developed around the Godavari, Krishna and Kaveri rivers. In our land, rivers have been deemed so significant that we worship them. Unfortunately, worship we do, but we collectively don’t take care of them.

Our current prime minister Mr. Narendra Modi, launched his 2014 election campaign from the banks of the Ganges in the city of Varanasi, declaring that he had been called on by “Mother Ganga” to restore the holy river. Yet, one of India’s leading environmentalists paid the ultimate price last week in his efforts to protect and restore the Ganges River. Mr Guru Das Agrawal a respected professor of environmental engineering at the Indian Institute of Technology in Kanpur had been on Gandhi style hunger strike to compel the Indian government to take immediate action on cleaning the water of this mighty river. Unfortunately he passed on 11 October following a 111-day fast.

“But in the past 4 years all actions undertaken by your Government have not at all been gainful to Ganga and in her place gains are to be seen only for the corporate sector and several business houses,” - Guru Das Agrawal to PM Modi

Top sources of pollution in rivers in India:

The discharge from industries is directly pumped into the rivers without treatment. This harms the aquatic life in the river. There are norms in place, but either they are not followed properly or the norms also need updation. Currently as our nation is under lockdown due to Corona Virus, this can be clearly seen in the waters of Ganga. According to B.D Joshi (Environmental Scientist and Ex-professor at the Gurukul Kangri University) there is a 500 per cent decrease in total dissolved solid (TDS) in the rivers water right now !

Primarily due to improper agriculture practices and city sewage discharge sewage into the rivers eutrophication is often induced. The main cause is the discharge of nitrate or phosphate-containing detergents, fertilisers, or sewage into an aquatic system. Eutrophication leads to overgrowth of plants and algae in aquatic ecosystems. After such organisms die, bacterial degradation of their biomass results in oxygen consumption, leaving less oxygen for the fish life and reduction in biodiversity.

India is a highlighted place when it comes to religious beliefs leaving us no short of the rituals we can perform for any kind of happening in our life or after life. Some of these rituals harm the rivers, which include dumping dead bodies in water, bathing, throwing waste in water, etc. Earlier, there used to be crocodiles to consume a floated body, but these days there are no crocodiles left in rivers because of the pollution. Irony ! Ganpati festival celebration, the idols of the lord Ganpati made mostly of plaster of Paris and harmful colours are directly immersed in the river polluting it.

- Reduction in water quantity in rivers

Climate change, global warming, and all the other harmful environmental impacts cause evaporation of the river water on a higher than usual levels. As there is reduction in water quantity, the pollutants gets deposited on the banks or at river beds. 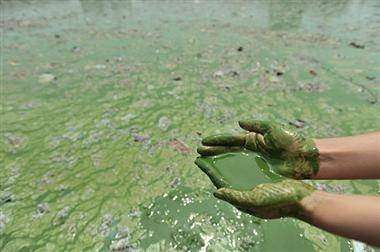 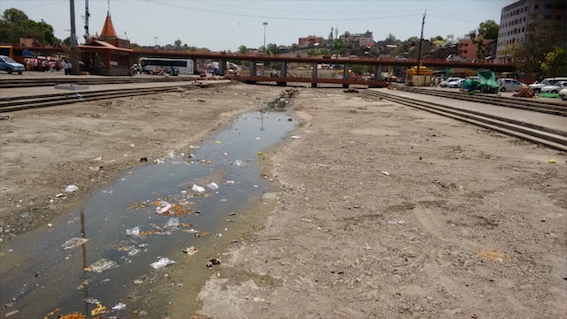 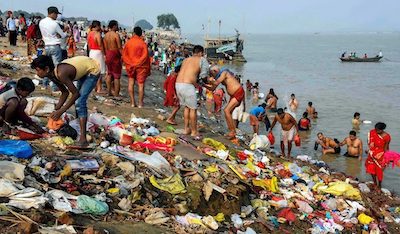 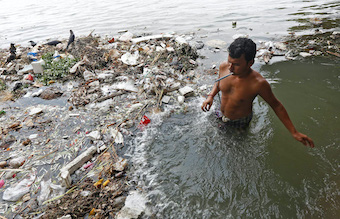 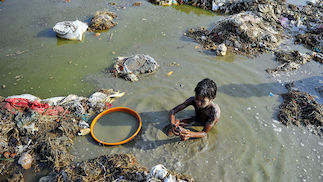 Humans construct all kinds of structures to collect the flow of river water to be used for various purposes like agriculture, electricity production, village usage, etc. Though there are various advantages of the dams we build, like renewable energy, clean water supply, flood controls, irrigation, fishings and tourist destinations they also have a negative effect on the environment.

- Dams can displace a significant number of people. Estimated 500 million people have been displaced due to dams in the last two centuries because of the reservoirs that form behind each structure. As the surrounding area gets flooded, it is no longer safe or possible to occupy and live for human life.

- Reservoirs behind a dam can lead to higher greenhouse gas emissions. On the up stream of the the constructed dam, a lot of vegetation, trees and plants get engulfed in water and eventually die. This dead organic matter releases methane, a gas which has 21 times more greenhouse effect than carbon-di-oxide gets released into the atmosphere. Add this to the CO2 which the trees would had absorbed if they had not died!

As dams are designed to store maximum possible water, there is a huge reservoir of water disrupting the wildlife habitats lengths of kms behind the dam wall. Marine life like migratory fish which relies on the unobstructed flow of river also takes a hit.

- Dams create a flooding risk if they experience a failure. One of the objectives of building dams is for flood control on the downstream, but if a dam experiences failure the results are catastrophic.

- Dams can have an adverse impact on the groundwater table. As the riverbeds deepen on the downstream side of the dam, this causes the groundwater level to fall, challenging the roots of the plants and forcing the homeowners to dig deeper wells for water. Also, water which is found in the extreme depths of the wells is harmful for human consumption directly.

- Dams can block water progression to different states, provinces, and countries. When a dam is built at a place, the local authority gets complete control over the water in the area. We have already seen a result of this as severe issues between neighbour states, creating a constant source of conflict that can sometimes also even lead to war.

One thing for sure is that we Indians must take on to cleaning the river waters as a important and immediate task. There are lot of interdependencies on the health of river water and the health of human and all other life forms. Water in liquid form is the ultimate source of life on Earth, which distinguishes us from the other celestial objects we observe and there is no doubt that without water life would had not evolved as it has. Rivers are the integral part of water distribution system over our planet, ensuring that this life giving water reaches to all the corners of the world. Yes, we modern humans have diverted, obstructed, used the rivers as per our comfort but it is very important to realise we are not alone on this plant and consider the effects of our doing on the other lifeforms.

Future Energy Supply for Our Country - Will Coal Power Plants go away by 2050 ?

Why to Install Rooftop Solar Plant in Pune ?